A quick update to my post from yesterday alleging that Panini failed to award the proper winner of their Player of the Day contest.  Panini responded to someone else on Facebook asking about the contest results.  Their response is completely underwhelming. 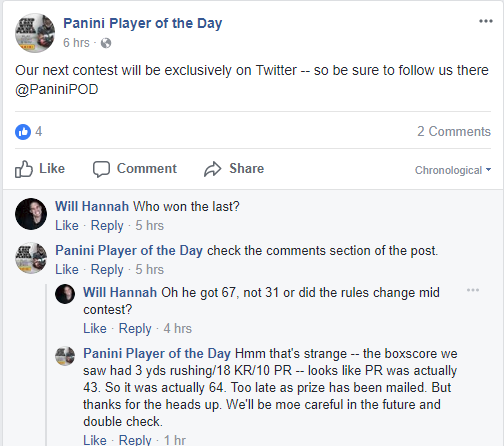 Their response boils down to a shrug of the shoulders.

They claim the box score they referenced was incorrect.  What box score did they use? When did they check it? Halfway through the game?

They claim it is now too late to correct the problem.  I reached out to Panini on Facebook and Twitter within a couple hours yesterday after they announced the winner.  You mean to tell me it was too late to fix their mistake then?  Panini doesn't even offer to contact the correct winner and offer a consolation prize.

Panini says they will be "moe careful" in the future.  The optics are not great when even their response contains a mistake.

Overall, this goes to show how little Panini cares (at least on the social media side) about their football card customers.
Posted by ketchupman36 at 3:00:00 PM