For the first time ever, I attended the Mariners Fanfest this past weekend.  Typically I've made excuses on why not to go (I'm tired, it's cold, it's rainy, etc..) but this year I committed to attending.  There were a few attractions that interested me such as touring the clubhouse and walking on the field.  However, my main focus this year was collecting autographs.

Since this was my first time I was not quite sure what to expect.  All I knew was that autograph session vouchers were limited so I needed to get there before the gates opened.  I woke up at 7AM and arrived at the stadium by 8AM; a full three hours before the gates opened.  The weather was a little on the chilly side but tolerable.  The worst part about waiting though was a loud, 45 second announcement that played over and over and over.  Luckily, I had the foresight to bring earbuds.


When the gates opened I nabbed a voucher for signings of Kyle Lewis and Tyler O'Neill, who are two of the Mariners' top prospects.  Lewis was the Mariners' #1 draft pick last year and played well until he tore his ACL.  O'Neill played for the AA Jackson Generals and earned himself the Southern League player of the year award.  He will be invited to spring training and is expected to the start the year in AAA. 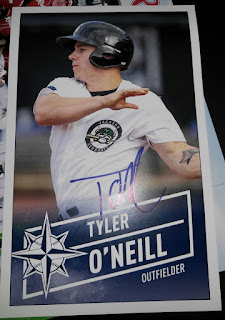 I foolishly relied on some advice from Reddit that in dual player sessions, you could only get 1 of the players' autographs, not both.  As a result, I didn't bring my O'Neill cards to get signed.  As a result, I had to settle with getting a photo signed.  I should have just brought my O'Neill cards anyway just in case but it didn't cross my mind.  It's not all bad though because I already have a signed card of his.  It just would have been nice to get an in-person auto.

My first on-card auto of the day did not turn out too well. I think the card was too glossy so the autograph smudged rather badly.  I'm still happy though.

After the first autograph session, I headed back outside the gates so I could get another autograph voucher.  Surprisingly, not only was there no line to get in but there were still autograph vouchers available even though by then it was almost noon.  I went through security again and picked up a voucher for another prospect, Andrew Moore.  After that, I walked back outside again to get one last voucher: Danny Valencia. 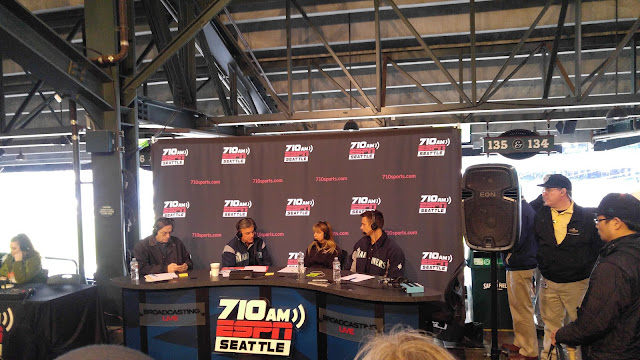 I had time to spare so I watched an interview with the man with the plan, General Manager Jerry DiPoto.  Interviewing him is Mariners radio broadcaster Rick Rizzs. Rizzs is a fantastic broadcaster so listening to him on the radio is a pleasure. 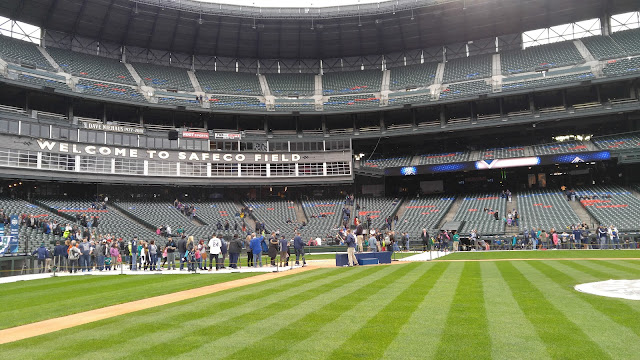 I also had time to walk around the bases.  Walking on the field is a cool experience and I cannot imagine being down there with a full stadium.

Drafted in 2015 under the old regime, Moore earned himself a promotion last year with a bump up to AA.  He looked promising in AA, going 9-3, with a 3.16 ERA.  The Mariners think highly of him as he is a non-roster invitee to spring training this year.  I'm not sure if he will start in AAA but I imagine that is the case.

In my opinion, the black sharpie on this Topps design does not look as sharp as the blue.

With the "loss" of Adam Lind to free agency and Dae-Ho Lee deciding to head back to Korea, the Mariners had no solid first base option other than Dan Vogelbach.  Vogelbach is unproved in the majors so a veteran presence was needed.  If Valence can hit .275 with 20 home runs and 60 RBIs, similar numbers to last year, he will be a solid addition.

I considered Fanfest a success with four autographs.  I was exhausted after getting up early and doing a lot of walking/standing but it was worth it.  Here's to making the playoffs this year!

Like a lot of people, I was ready to start fresh with 2017.  However, the new year has not been so kind.

My father passed away on January 2nd.  He fought an unwinnable battle with brain cancer for 13 months.  While I knew his death was imminent during the last month or so of his life, I still could not prepare myself for the moment.  I'm only 31 so I was not ready to lose him with so much more of my life (and his) ahead.

In the past week and a half I have barely even touched cards and had even less of a desire to blog.  I spent my week off from work playing The Division as a way to distract myself.  I'm now finally ready to share a small tribute to my dad.

My dad never had his own trading card but he did share a name with someone who did.  As you will see, he did not have a common name so it's quite remarkable he shared a name with a professional sports player.  Out of the four cards produced for the player--Ken Solheim-- I currently own one.  I will try to pickup the other three at some point as a small tribute.

What is interesting is that my dad and the hockey player lived in the same town for a while.  That created a funny story that my dad liked to tell (and I will try my best to retell it).

Scene: Minneapolis, Minnesota. Early 1980s.
It was late at night when my dad received a phone call waking him up from his sleep.  He said that the first thing that popped into his mind was that "shit, someone has died."  When my dad answered the phone on the other end was a young sounding woman with a southern drawl.


The whole time my dad was confused as to what was going on given the middle of the night phone call.  Best my dad guessed was that the hockey player Ken Solheim met some girl named Suzy in Nashville and told her that he played hockey for the Minnesota North Stars.  So when Suzy tried to find hockey player Ken, she looked in the phone book and my dad's number would have been in there.  The timing of it all was too funny.

I'll likely have sparse posting for this week and hopefully try more regular posting next week.
Posted by ketchupman36 at 8:51:00 PM 6 comments: