Day 9: Blast from the Past 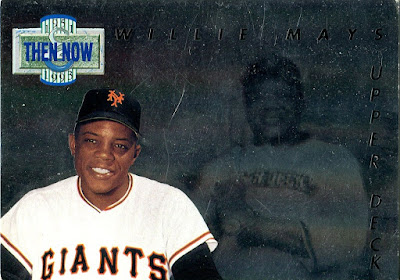 I don't own any 1950s cards.   This card will have to act as my best substitute, featuring Willie Mays from 1951.  I've had this card since I was a kid and it was one of my most prized possessions.  At the time it was booked in Beckett as something like a $4 card!  That is a lot of money for an 8 or 9 year old. 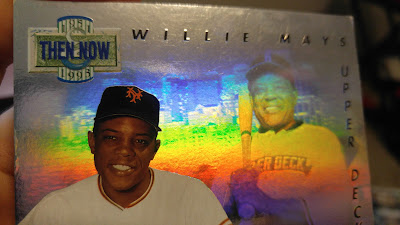 The card scans flat looking.  In person, the card has a holographic effect with what I'm guessing is the San Francisco skyline.

After playing on a Sega Genesis, the Nintendo 64, in particular Super Mario 64, was revolutionary.  3D graphics! Huge worlds! Freedom!  When I saw footage of Super Mario 64 I knew I wanted that game.  For my 12th birthday my parents gifted me an N64 along with a copy of Super Mario 64.  I was the happiest kid in the world.

The most iconic song from the game is the overworld theme for Bob-Omb Battlefield, the first level in that game.  I spent a lot of time riding around on a Koopa shell like it was a skateboard just because I could.  That kind of experience was entirely new with Super Mario 64.

Another contender for today's song was the Hyrule Field Main Theme from the Legend of Zelda: The Ocarina of Time.  OoT was highly anticipated as it was the first Zelda game on the N64.  Zelda simillarly promised expansive worlds with freedom to go wherever you wanted.

The first hour or two of the game was spent in the tightly controlled Deku Woods. Once you make your way through the woods you reach Hyrule Field.  Hyrule Field was where the game opened up. As such, hearing the Hyrule Field song takes me back to the feeling of awe when I first made it there.