I've never been one to chase parallel sets. It's hard enough as it is chase the best set.  I can understand why people put together "Frankensets" as an easier way to make a parallel set.

2008 Topps has only four parallels (/2008, /67, /1, and non-serial numbered gold foil) so a Frankenset does not make much sense.  I had my eyes on a couple gold starter sets for 2008 Topps on eBay. After selling some Magic cards on eBay I decided to splurge seeing as how this is my favorite set.

Between Topps and Topps Update, I acquired 54% of the gold parallel set.  Not a bad haul! The seller said he has another 200+ gold cards that he could sell, which I'm seriously considering.  The toughest card to find will be the gold Kershaw from Update. 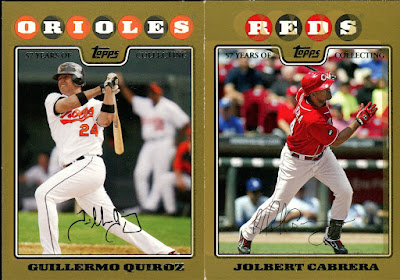 Many of the gold Update cards had slight printing issues, unfortunately. The cards have a gold base and then a gold sparkly printed on top.  This resulted in an overlap of the gold printing.  The flagship cards did not appear to have the same printing issue.

As you can tell, the gold circles do not match up. This is the worst of it.  The rest have minor issues, if any.

Lastly, some pointless trivia for each set:

Being only 54% complete for the sets, it makes me wonder, have you ever completed a parallel set?