I didn't make it out to a card shop on Saturday to pick up my pack of free Topps cards for National Baseball Card Day.  My schedule Saturday morning was packed.  When I woke up I had to finish cleaning the house and yard for my wife's baby shower that afternoon.  We will be having a baby boy at the beginning of October!

After cleaning up, I needed to leave the house before the two dozen ladies stormed upon my house.  I planned to see Dunkirk in IMAX, which didn't leave me any time to swing by my LCS. I did, however, have a chance to stop at Target to pick up a blaster and hanger pack of Topps Chrome since it is next to the movie theater. There was nothing of interest in my packs so I'm not going to bother showing them off.

Dunkirk in IMAX should be the only way you see the movie. The tension of the movie felt ratcheted up even more given that the screen was larger and the sound had greater depth. I've read some articles about how the movie is not completely accurate but these inaccuracies do not take away from the powerful nature of the film.

Anywho, while I didn't partake in the official pack openings, I did pick up a Seattle Mariners stadium giveaway set on eBay.  I didn't need cards of the jabronis Topps was giving away on Saturday. I wanted my Mariners! 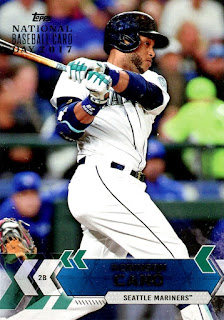 Cano leads off the Seattle team set and is the Seattle representative in the main promo set.  This design is much better than the Topps flagship design. 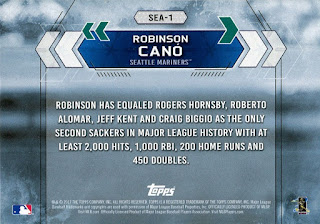 A quick look at the back of the cards. 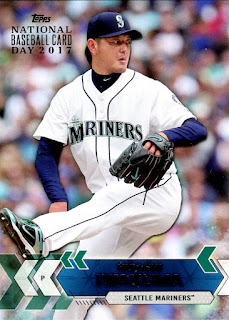 This could be Iwakuma's last card as a Mariner.  He has been sidelined with injuries this year and with his age, the Mariners will likely move on from him. 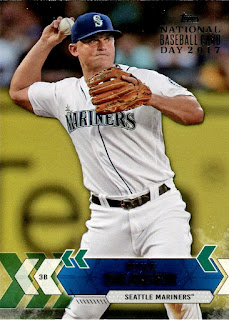 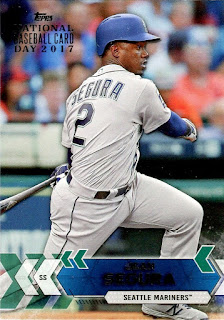 I appreciate the fact that Topps included a current season photo of Segura.  I can tell by the patch on his right arm. 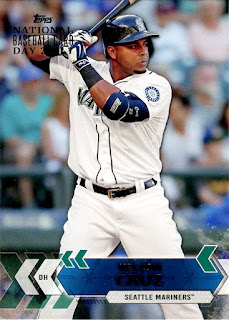 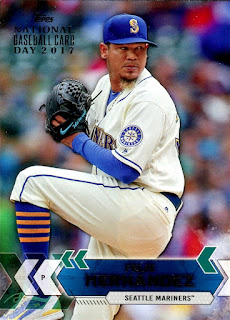 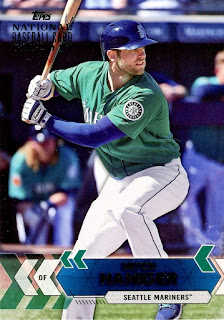 I do wish Topps would use a new photo of Mitch Haniger.  They have been using this photo since the Spring Training Topps Now set.  The Topps Now sets were supposed to be unique.  When Topps continues to use the same Spring Training photo, when Haniger has surely plenty of regular season photos, it is very disappointing. 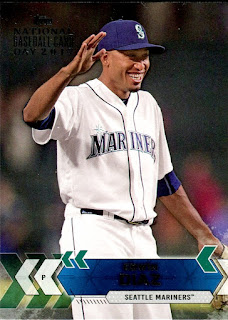 Diaz has not been the reliable, lock down closer that I had expected him to perform like.  He's still been pretty solid in the closer role.  He's young and I think he will get even better with more experience. 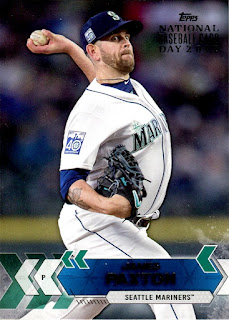 This is my favorite card in the set.  The Paxton photo looks excellent with the 40th Anniversary patches prominently shown.  Paxton was pitching lights out this year until his most recent injury. This is his second stint on the disabled list.  He loves going on the DL. 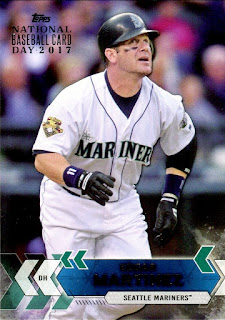 I believe every team set featured one legend card.  A Griffey card would have been nice but Edgar is nothing to sneeze at.  The Mariners retired his number over the weekend, making a big show about the retirement weekend.  In typical Mariners fashion, they lost every single game against the Angels. They sure do know how to disappoint their fans.

I hope everyone had a good National Baseball Card Day!