Today I present to you a rare NASCAR post.  Rare in the sense that I will rarely ever make a NASCAR post.  I don't follow the sport anymore and I have no desire to start watching again.

Growing up as a kid I was a huge NASCAR fan.  I lived in Concord, NH, which was a short drive to Loudon, home of the New Hampshire Motor Speedway.  My dad and I saw several Busch and Winston Cup races there.


I can't recall any specific races, except for one.  It was a Busch Cup race and I was really excited to see my favorite driver: Ernie Irvan.  Of course Irvan crashed early on and was out of the race.  My dad said I pouted the whole rest of the race.  I also remember not having any interest in the rest of the race.

We would also make an annual pilgrimage down to Dover Downs in Delaware to make a weekend out of the races. Dover, which is nicknamed The Monster Mile, was always exciting.  The turns are banked a massive 24 degrees. It does not sound like much but it is steep in person.  The high turns created a lot of action, i.e., crashes.

We'd stay in Elkton, MD, which was maybe 30-45 minutes outside Dover.  Near our hotel there was a go-kart track that was a lot of fun.

Once my family moved out to the Northwest in the late 90s, it's fairly easily to pinpoint that as the decline in my interest in NASCAR. Most of the action is out on the East Coast so being three time zones away does not help.  The drivers started to change and NASCAR itself also changed.  There was a shift towards bigger tracks, which eliminated part of the charm for me.

I attended the last Winston Cup race at North Wilksboro in 1996.  North Wilksboro was a small track that made for more technical races.  The track wasn't fancy but it gave the sport some character. Unfortunately, the track is a shell of its former self.

Turning to the title of this post, one of my favorite things about NASCAR was the diecast cars.  I collected them every chance I could get.  There were several Christmases where all I wanted were diecast cars.

My first diecast car was the above pictured Ernie Irvan #4 Kodak car.  How do I know it was my first diecast?  Well it's the fact that it's all beat up.  Before I knew that certain kids toys were supposed to be displayed and not played with, this Irvan car went in my giant milk crate of toy cars.  I would toss the car in without any consideration as to whether the pain was being damaged.

By the time I got my second diecast car, I realized that I should take better care of my NASCAR cards.  Every car I got since then has been kept in great condition.  All 50+ cars are now sitting on a shelf looking good.

Billy over at Cardboard History made a post about correcting a mistake he made in 1995.  I think his post finally encouraged me to correct a mistake I made around the same time.  After a quick search on eBay, I found the same car in it's original package for only a few dollars.

As you can see, the new car looks much nicer than the old one.  No pain scratches, less faded, and no faded decals.  I'm really happy with my purchase, especially since the cost was minimal.

Since this is a card blog, I'll conclude with the card that fits into the back of the stand: 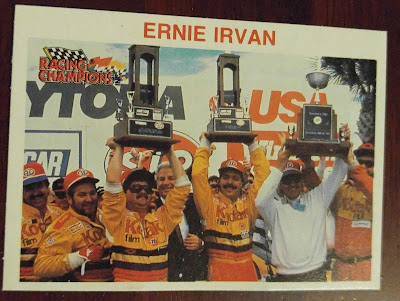 I don't know if these cards are listed in The Trading Card Database but I should check.  It's a basic card with minimal driver information.  I don't expect anything more as this card takes a backseat to the card.  I do like the celebratory color picture on the front.

Don't expect NASCAR posts to make any regular appearances on this blog.  I think I have at least one more in me but it won't be any time soon.
Posted by ketchupman36 at 7:30:00 AM