Beginning to Breakdown a Heap of Cards

Gavin over at Baseball Card Breakdown recently celebrate his 1000th post on his blog.  Let me just say that is a helluva lot of posts.  My hat is off to you Gavin because that takes some dedication.

To celebrate, he held a contest giving away a medium flat rate box of cards.  Thanks to the ineptitude of the Red Sox and Tigers' pitching staff, I came away as the lucky winner!  A week or so later, a heavy box of cards showed up at my door step.  True to his word, the box was filled with cards. Close to 2000, I'd say.

Thanks Gavin for all the wonderful cards!

I have not gone through every card but I will do my best to capture the essence of the package.

First up we have 2017 Topps Archives.  I really liked the sets they chose to recreate this year, with 1992 Topps probably being my #2 favorite set overall.   If, and when, 2008 Topps makes it's appearance in Archives, I'll be all over it.  Anyway, I put collecting the '92 cards on the "maybe someday" list but now I'll have to see how many more I will need. 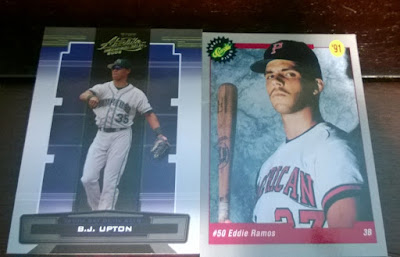 Here are a few random singles that made up a portion of the box.  There was a nice amount of cards from the 90s and 2000s that I've never seen so I'm excited to go through them all.

They weren't all a decade or two old.  Gavin included a good assortment from cards from the last few years.  Anything pre-2016 is likely absent from my collection and even 2016 has quite a few set needs. 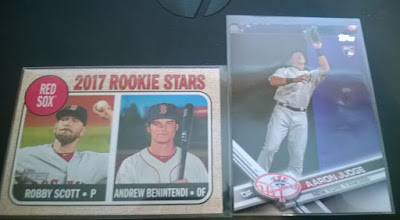 Hot rookies! I feel like the buzz surrounding Benintendi has cooled off whereas Judge is grabbing the headlines launching baseballs into space.  These are both great cards to have. 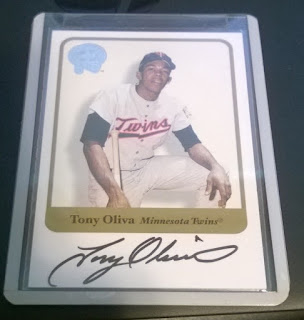 Since you've made it this far, it's time to treat you with an autograph.  I do not know much about Tony Oliva.  He appears to have been an excellent player who would likely be in the Hall of Fame were his career not derailed by injuries.  AL ROTY, 8x All-Star, Gold Glove Award winner, and 3x batting champion.  He's also a 2x World Series Champion with the Twins as a coach.  Quite the baseball resume.

There was a small lot of Rays, which makes me wonder whether Gavin had/has a Rays PC or was PC certain Rays players?  I'm guessing it is the latter.  Included is one half of the Mariners hair sensation, Taylor Motter.  Motter's bat has struggled lately but he still brings speed and defense. 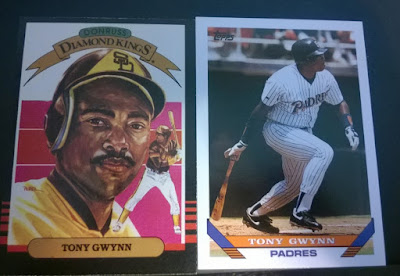 Gavin caught wind that I was trying to build up my Padres collection and since he is a Padres fan himself, he was happy to spread the Padres love.  New, old, Tony Gwynn, you name it, it might be in the box.  If Tony Gwynn and/or the Padres do not move into the Top 2 for my player and team collections, I will be very surprise.

I'll need to buy a new pack of mini card sleeves as there are a lot of Mariners and Padres minis.  I know some people aren't a fan of the minis but I sure am.

If the Padres don't overtake the Mariners for the #1 spot in my team collection, it will be because the box contained many Mariners cards.  I can say with confidence that at a minimum 90% of these cards will be new to my Mariners collection.  Looking through these cards is a nice trip down memory lane of all the Seattle studs (Harold Reynolds, Felix Hernandez, Alex Rodriguez) and duds (Dustin Ackley, Jesus Montero, Stephen Pryor).

The box was not all baseball. I collect a little bit of everything, sports and non-sports, and this box fills that niche. 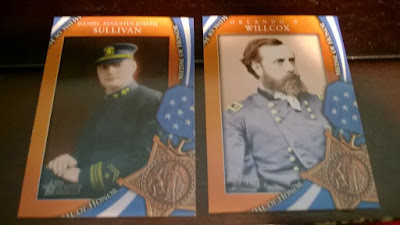 I minored in U.S. History and these Heritage cards are right up my alley.

I think this marks the first Olympics cards to enter my collection.  These are from the 1992 Olympics.  I'll have to check for some cards of the Dream Team. 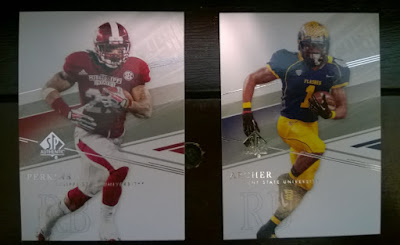 A handful of college football cards.  Seeing these cards makes me upset that Panini has an exclusive license.  Upper Deck produced some nice cards. 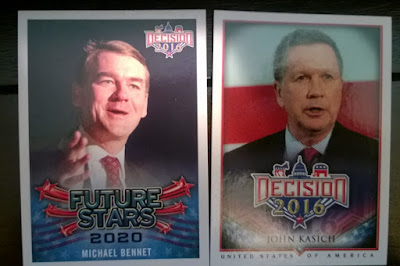 I majored in Political Science and I'm a politics junkie.  I have a few of the 2016 Decision cards so I'm ecstatic to receive more.  I think the guy behind the Bench Warmers cards is the brain behind the Decision set. 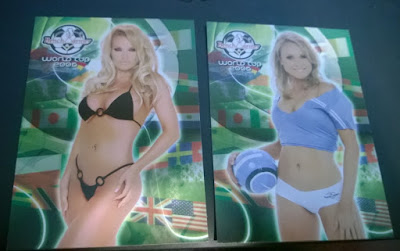 Speaking of Bench Warmers--there were a bevy of beautiful babes.  Out of all the cards I collect I probably won't start collecting these so they are up for the ogling, I mean, taking. 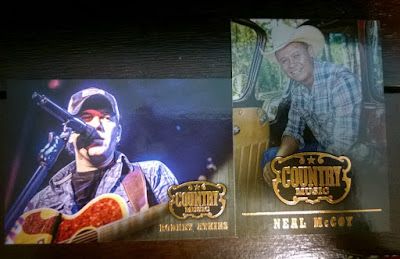 You won't catch me listening to contemporary country music so you likely won't catch me keeping these around in my collection (any country music fans interested?).  I do not mind older country such as a Hank Williams.  For modern stuff, I will take some alt-country like Ryan Adams or Wilco though.

Now the Beach Boys I can get into.  I've seen boxes of these for cheap on Blowout and I've been tempted to buy a couple hoping to get a Mike Love autograph. 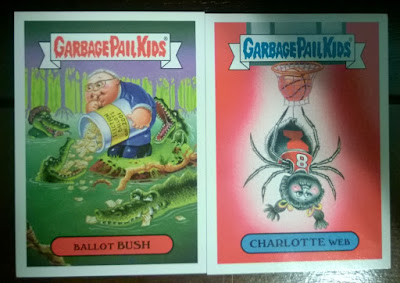 I get e-mails from Topps advertising their newest card of the day and the Garbage Pail Kids make an appearance at least once a week.  The new GPK cards aren't shocking or grotesque like the ones from the 90s.  Yet the cards still find a way to be relevant with clever titles. 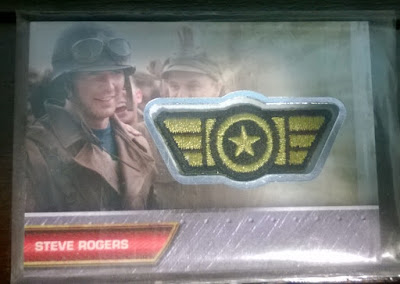 A manufactured patch card from Captain America during his pre-superhero days.  At least I think that's when it is from. I don't keep up with Marvel. 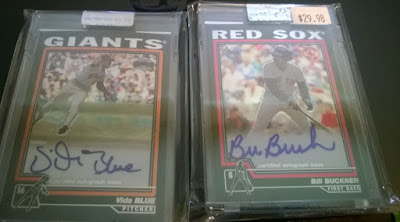 Getting close to the end. Hang in there!  Here we have two 2004 Topps Retired Signature Edition cards.  One of Bill "Between the Legs" Buckner and the other of Vida "I've got more WS Rings than Buckner" Blue.

Gavin does an excellent job with his custom cards. 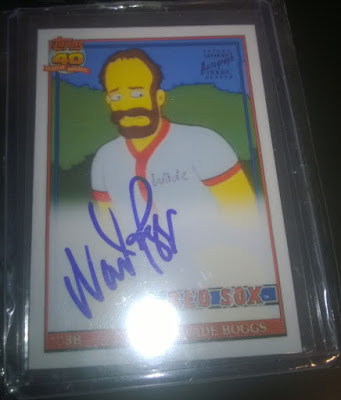 *takes a deep breath* Last and certainly not least, the crown jewel of the box, the icing on top of the cake: a Wade Boggs autograph on one of Gavin's Simpsons customs.  Not only that, it is stamped 1 of 1!  When Gavin said that this was the mystery card prize it took me no time at all to decide that this was the one I wanted.

A unique card featuring the Hall of Famer from one of the best Simpsons episodes.

Phew! This box of cards will keep me busy for weeks trying to input all of them into my collection.  I'm only having slight anxiety at trying to figure out where I will store them all as I ran out of room in my shoe box house months ago.  Tough problem to have, right?

Thank you again to Gavin for your generosity and the thought you put into this package.  I truly appreciate it!
Posted by ketchupman36 at 10:43:00 PM