I wanted to give a quick shout out to Colby at Cardboard Collections for the free Drew Bledsoe card. He has was giving away a few lots of cards and when I saw this Bledsoe, I knew it would make a great addition to my WSU Cougar binder.  Although the "Washington State" name was removed from the front of his jersey, you can still see the Cougar logo on his arm and "Cougars" written on the helmet. 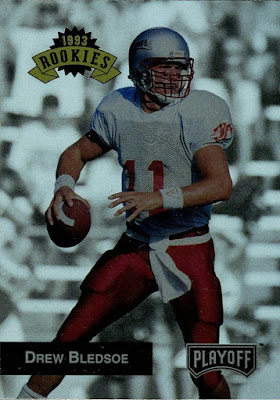 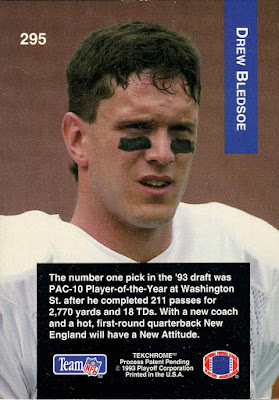 The front has Tekchrome technology, which is essentially today's chrome look.  In person, Bledsoe's body pops off nicely from the background.

Bledsoe famously lost his starting job to second-year player Tom Brady after Bledsoe went down with an injury.  Brady would go on to lead the Patriots to their first Super Bowl win.  Bledsoe moved on to the Buffalo Bills the following year.

Bledsoe was a Cougar great and it's nice to finally have a rookie related card.  Thank you Colby!
Posted by ketchupman36 at 8:00:00 AM