Autograph from a Veteran

Today I received my first through the mail autograph from an unexpected signer.  I saw a post a few weeks ago that Burke Waldron signed quickly for autograph requests. However, Mr. Waldron is not an athlete.  No, he is 92-year-old World War II veteran who threw out a first pitch at a Seattle Mariners game last year.  He was lucky enough to be featured on a First Pitch insert for the 2016 Topps Update series. 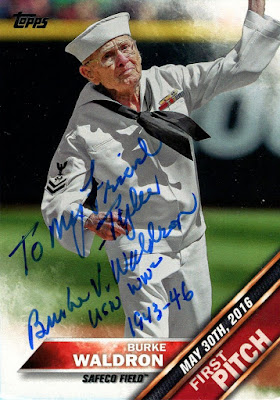 I sent Mr. Waldron a copy of his card, along with a small note saying he looked like he had a lot of fun. He went above and beyond signing the card with an nice inscription.

His first pitch is truely worth watching.  Despite being 92, he had the hustle and zing of someone half his age. 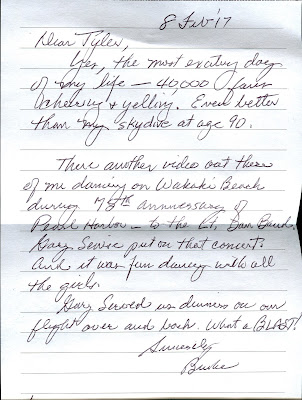 He was also kind enough to send along a note:

There [is] another video out there of my dancing on Waikiki Beaching during 78th anniversary of Pearl Harbor--to the Lt. Dan Band. Gary Sinise put on that concert, and it was fun dancing with all the girls.

Gary served us dinner on our flight over and back. What a BLAST!

That does sound like a blast! I would love to find that video he mentions.  And let it be said that for his age, his penmanship is excellent.  Far better than mine currently!

This was a very fun TTM request that will be hard to top.
Posted by ketchupman36 at 9:46:00 PM