My wife gave me the go ahead to participate in National Baseball Card Day on Saturday so long as I took the baby with me.  Seeing the deal as a no brainer, off we went to the first of two stops.

The first shop was the shop I typically go to when I'm buying new boxes.  It's never been my favorite place mainly because I feel my interactions are always just transactional.  I've never really stopped to talk with the owners or opened any packs with them.  Partly it's because I'm usually dealing with the wife owner who I get the sense is not that into cards.  She's nice and everything but like I said, our interactions are just transactional.  The other part is that my personality is not the type to hang around and just strike up conversations.

Although I will say today that when I brought my son in to the shop she took interest in him so we talked about him for a minute or two.  That was pleasant.

When I entered the shop I asked the husband owner if they were giving away free packs.  He asked me if I had a redemption ticket and I replied that I didn't think we had to have a redemption ticket.  He said it was no problem and gave me a pack anyway.

I looked at the pack and they appeared to be standard 2018 Topps cards; not special NBCD cards.  I didn't say anything because I thought maybe I was confused as to which packs were being given out today.  He's usually on top of promotions so I don't know what happened.  He also mentioned that if I spent $10 on Topps products, I'd get a free Aaron Judge card.  So clearly he knew at least somewhat about the NBCD promotion.

The free pack of cards was as I suspected just base 2018 Topps. 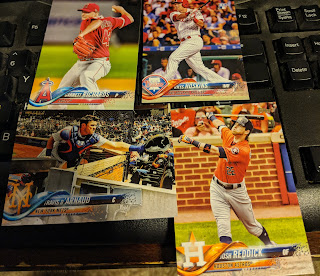 Hey at least I got a Hoskins rookie out of it.

I did not want to leave without buying something new so against my better judgment I bought one box of 2018 Topps Clearly Authentic.

For $50, I would get exactly one autographed card.  This could have turned out really poorly or really well. 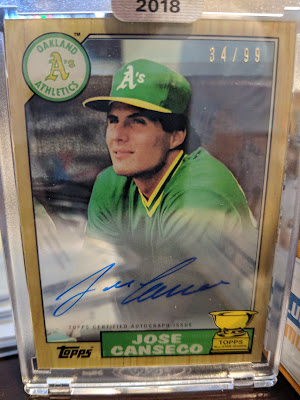 Turns out, it fell about somewhere in the middle.

On first impression: not the best autograph I would hope to get but a far cry from the worst.  On the plus side, I do not have a Jose Canseco autograph so this card will fit nicely into the collection.

I looked up comps on eBay and Canseco signatures from this product are actually going for more the price of the box.  That helps vindicate my purchase knowing that in theory I got full value out of the box.

Looking at the checklist on Cardboard Connections it appears that these reprint autographs are a case hit! Double score!

Despite the mix-up with the free pack of cards, the trip worked out nicely.

The second stop was a place I've never been to before--Diamond in the Mall  It's actually even closer to my house than the other shop.  Upon entering I quickly got a sense of the shop.  It's main focus is selling singles.  The wall of wax was rather spare and contained mostly Topps flagship products.  That's perfectly fine.  It must be pricey to keep up with all the differing releases.

I asked the shop owner if he had the free packs and then he pulled out the box of correct packs and let me pick out which one I wanted.  He then saw my son in the stroller and said since there was two of us I'd get another pack.  I'm liking this shop already!

The collation on my two packs was hot garbage.  Out of 5 cards, four were duplicates.  I've already turned the Posey duplicate into an Ozzie Albies card so at least the duplicates are coming in handy. 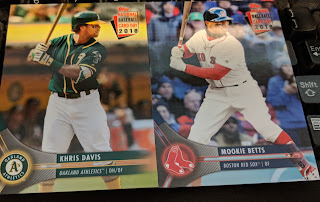 Here are the two cards that were not duplicates.

After looking at the display cases, I settled on four hobby packs of 2018 Topps Chrome.  During this time I was chatting with the owner and got the sense that he truly enjoyed cards.  After paying for my packs I told him I might as well open up the packs in the shop.  He indicated he was interested and even offered to sleeve any good cards! That's the kind of experience I've always wanted from an LCS.

I opened my three packs and as you'll see below, I didn't really hit anything noteworthy for a hobby box.  While I was opening the packs we continued to talk and even ventured into topics outside of cards such as raising kids and the changes going on in the area.  He was a great guy to talk to. My son was getting pretty fussy so I had to bail.  Otherwise I probably would have stayed a little while longer. 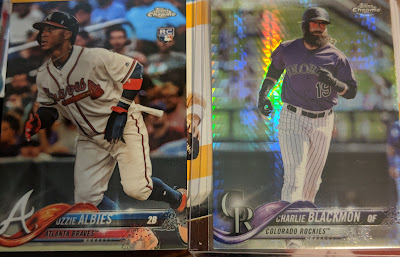 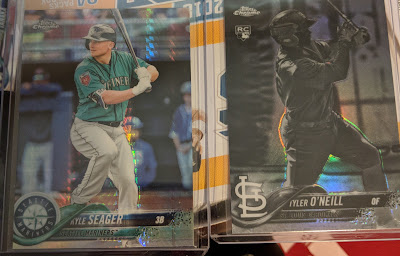 No numbered parallels; only one notable rookie; no autographs.

After I left he flagged me down to call me back into the shop. He told me he forgot to give me the bonus cards since I bought Topps products.  He then pulled out a stack of the Judge cards and a stack of the Hoskins cards.  The owner said since I spent $20 I could take one of each.  Hoskins isn't supposed to come out until a couple weeks later but I'll take it! 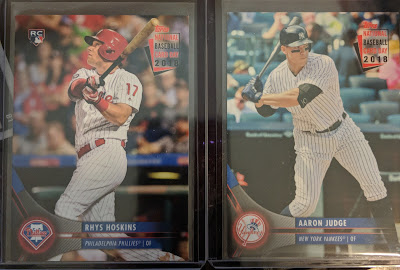 It sounds like the promotion isn't being well explained to shop owners.  Oh well, I still had fun.

Even though the new shop I visited doesn't keep up too much with new products, I'll still try to visit semi-frequently if just to buy a couple singles here and there.  The shop owner is a cool guy and even if his store isn't the flashiest, it feels like an old school shop.
Posted by ketchupman36 at 11:19:00 AM