Chasing the Next Big Thing

Today marks the release of 2018 Bowman and for many collectors, the chase of Shohei Ohtani in a mainline Topps product.

That means there is only one thing to do! 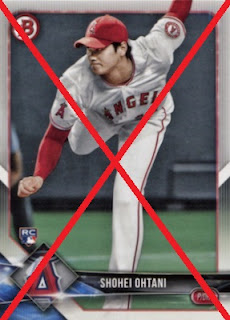 I don't want the next MLB prospects, I want the next, next level of prospects.  That's why for today, I opened a blaster box of 2018 Panini Stars and Stripes USA Baseball. 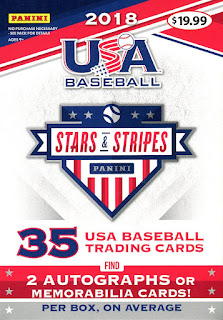 This is the kind of product you open up then stash away for a few years to see if any if your notable cards turned into major prospects.  I don't think these cards have significant long-term value even if a player does make it to the majors but it's fun nonetheless. 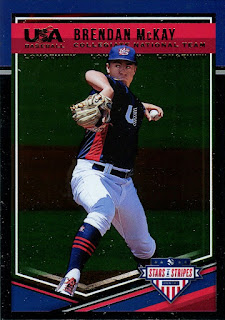 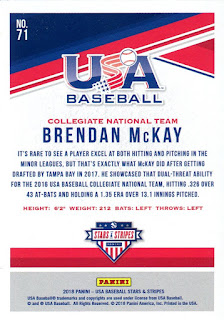 Ok so it turns out there are some current MLB prospects in this set.  He's not Shohei Ohtani but he wants to be like him some day.

The base cards are average.  The front has a lot of shine and the back has a small write up on the player's USA Baseball career.

The only notable thing about this product is the hits so I'm going to get right to it. 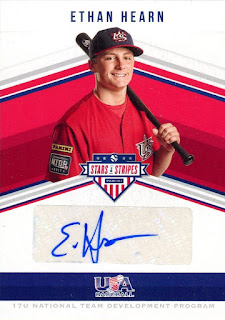 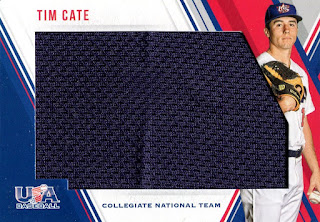 The last promised hit is a nice jumbo swatch of UConn pitcher Tim Cate.  Cate looks to be a Top 50 pick in the upcoming June MLB Draft.

I'd say that this is another decent hit. 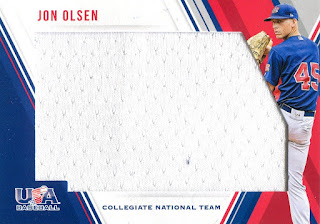 Well what do you know, a bonus hit! I think the USA Baseball products have a tendency to have bonus hits so I'm not too surprised.

Jon Olsen, a pitch with UCLA, is one tough SOB.  Earlier this year he fractured his face after taking a line drive to the cheek.  Less than a month later, he returned to action.  Bravo.

Overall, outside of the hits, the product is rather "meh."  I look forward to keeping track of where Cate and Olsen end up as they appear to be decent pitchers.