I have a couple mail days from bloggers that I need to post.  One that's old and sorely needs a post.  The other is a fresh package.

Let's start with a package from Nachos Grande as part of his "Season of Giving."  He sent over a flat rate box full of Mariners cards.  There were so many cards, many of which I have never seen.  I'll highlight a few of my favorites.

It's always nice to add more Griffey cards to the collection.  I haven't heard of Choice before but I'm guessing it's an offspring of Collector's Choice.


Normally I'd be loathe to highlight a card with Alex Rodriguez.   Although given my recent Padres fandom I'm happy to see Tony Gwynn.  I like this League Leaders card as it features the AL and NL player side-by-side.  Back before interleague play it always seemed like such a big deal to see AL and NL players together.


Another new set for me.  This set features a notable box score on the back for each player.  Edgar's box score was from the 1990 season when he had a two home run game.  From a historical perspective this could be a fun set to put together. 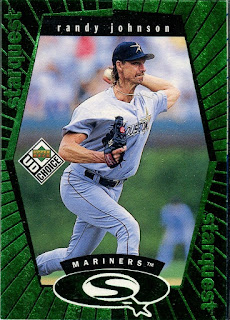 For whatever reason, I've enjoyed putting together the base Bowman set more than I have Flagship.  Maybe it's because prospects are sprinkled into the insert sets.  Plus, the colored parallels have looked a lot better than the Flagship design the past couple years.

I'm highlighting this card just for the fact of seeing Johnny Damon as a skinny, clean faced kid in a Royals uniform.  That's not the image I have of him in my mind.  He just looks so funny.

Next up is a recent trade package from P-town Tom of Waiting 'til Next Year... 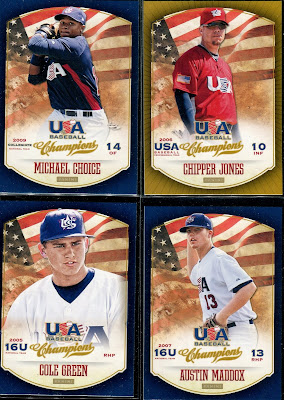 Here are the cards I was expecting too get, 2013 Panini USA Champions. This puts me under 10 left on the base set. I opened up a box last year chasing a Kris Bryant auto on the cheap (no such luck) and ended about a dozen cards short of the set.  I can't leave a set unfinished when I am so close.

Tom, being the stand up guy that he is, also sent along quite a few more cards. Thanks Tom! He said that he didnt know how the junk wax cards slipped into the package but as you'll see there was certainly some non junker cards!

A purple rookie parallel of Guillermo Heredia from the weirdly overpriced Chronicles. A blaster box contained a whopping 20 cards. I feel like Panini is always providing terrible value in their retail products. I don't care about hits but give me more cards damnit! These are not $1 cards.

I looked down upon Gallery as I thought a lot of the drawings were bad. This Seager card looks alright though. I only wish the cards were printed on canvas stock. That would have piqued my interest a little more.

If Mitch Haniger had not had his face busted open last season requiring plastic surgery, he could have been the Mariners' best player behind Cruz. Given the Mariners injury luck he will probably go down to an injury at some point this season.

I believe this is my first look at High Tek in hand.  These cards are kinda neat with the crazy background and translucent card stock.  I'll have to keep my eye out for more.


This card is thick.  Unnecessarily thick.  It's 138 pt.  There is probably some backstory here I don't understand.

Vintage! Wow! It's of the short lived Seattle Pilots.  I did not previously have any cards from 1970 Topps so this is an excellent addition.

Thank you again Tom! I am blown away by your generosity.  And believe it not I even appreciate the junk wax you sent along.

That wraps this post for today.  A lot of cards to sort through that will keep me busy!  Thanks for tuning in.
Posted by ketchupman36 at 12:00:00 PM