Donyess: A Look At 2016 Donruss Football

(Over at Sports Card Collectors he is running a contest for 2016 Donruss Football.  Considering I purchased a pack of these cards just yesterday, it is rather fortuitous that he has a contest for this set. This gives me a good incentive to write a review of my pack as well as to encourage you all to go enter).


After a few weeks of checking every time I shopped, my local Fred Meyer had finally restocked its card selection.  Now either they don't do a good job ordering cards or if my town really enjoys their cards because the store seems to go through it's card selection rather quickly.  Either way, the small card section contained several new products, including 2016 Donruss Football.

I'm always eager to try out new sets during my first year back into the hobby.  I happily picked up a larger rack pack; 20 cards for $4.  The breakdown of the pack was 14 base, 3 parallels, 2 rookies, and 1 insert. 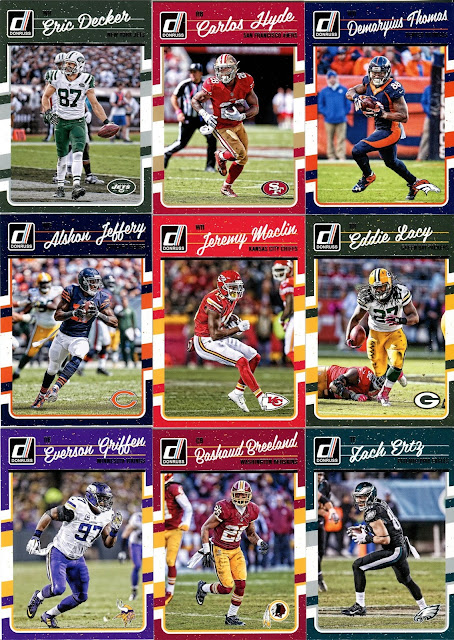 The base cards bare some resemblance to the base of 2016 Donruss Baseball, mainly with the stripes on the sides of the cards.  However, I find the football cards to be more visually appealing.  Each card pops with color that fills the whole border.  The name plate at the top reminds me of notebook paper, especially with the cursive writing.

The font choice for the names is excellent.  Some sets use cursive font as way to add perceived value to the cards to either make it look like a real signature or because the designers think nearly illegible cursive is fancy.  Here Panini is clearly not attempting to recreate signatures.  I feel like this font gives off a colorful vibe to go along with the rest of the card.

In typical Panini fare, this set has only one year of status.  The colors again pop on the back and mirror the colors on the front.  The back has a clean look to it and I just realized this as I'm typing but the font gives me a 1960s/Fallout 4 vibe.

Football aside for a moment, I found a Fallout 4 picture that shows I'm thinking: 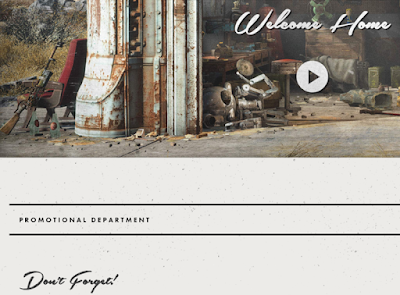 Can a font be carefree?  Because that's the feeling I get when I look at the back of these cards.  For such a violent sport, my feeling could not be more opposite to the sport itself.  Anyway, I'm too distracted by the font to finish talking about the back of the card so let's change subjects.

A new set is not complete without some rookies.  At the top is a Cody Kessler Rated Rookie and at the bottom is a standard Karl Joseph rookie card.  As you'll see below, the Rated Rookie cards all look the same from a design standpoint.  They also appear to feature staged photos of the players, rather than action shots.  I have no idea why some cards are Rated Rookies and some are not.

The base rookies look exactly like the base cards. I am perfectly okay with that.  Although, I'm mostly certain that the photo of Joseph is Photoshoped.  There would have been no opportunity for Panini to get a photo of him, in a Raiders uniform, in a stadium.  I say well done to Panini because this is a clean edit.

I have little to add about these blue Press Proof parallels other than they are stamped in blue with foil lettering stating Press Proofs. These are not numbered.  The team name and position lettering is also blue foil.  This shade of blue is a nice choice.

The lone insert of the pack, a Legends of the Fall insert.  I'd rate this set a solid "meh" in terms of theme and player.

What do I think of this set?  Well, Donruss has a "Donyess" on it's hands.  I've come to realize that I prefer more of the low-end sets because the designs don't seem as pretentious.  This set fits that mold. I'm a man with simple tastes.  I hope to pick up more of these cards.